Stars in the Universe - their formation, lifespan and different types

It is generally thought that the stars in the Universe are formed from the exploded remnants of other stars. All well and good, but where did the first ever stars come from? This leading question is dealt with elsewhere on this site.

For this page, we'll just be considering the life cycles of stars, the different types within this cycle and the mechanics of their interiors.

Clouds of molecular dust are rife in the Universe, resulting from previous giant stars going supernova. This appears to be a never-ending process, where old stars explode and new stars are then created from the debris. 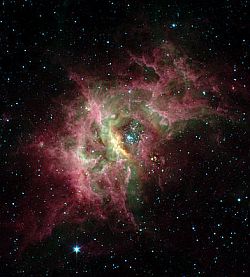 A "star nursery", where stars are being formed

The molecular dust in these clouds begins to drift into a clump, due to gravity. It coalesces into a central mass. For a time, it exists in equilibrium - that is to say, the energy produced by the components of this mass, wanting to drive it apart, is cancelled out by the increasing gravity the mass is experiencing.

Eventually, gravity becomes so strong that it overcomes the other force and the mass becomes more and more dense, resulting in its temperature rising.

At a crucial point, the mass becomes a "protostar". All sorts of various chemical reactions are going on, but the bottom line is, another type of equilibrium occurs, known as "hydrostatic" where internal pressure stops the protostar from collapsing any further.

By now, the temperature of this mass has reached some 2000 degrees Kelvin (about 1725 degrees Celsius) and, in due course, the remaining dust round the protostar disperses and it becomes a "pre-main sequence" star.

The thing we're waiting for is nuclear fusion to take place - the key thing to turn the object into a "main sequence star", the sort that twinkles in the night sky. This eventually does occur and, at this point, the star is said to have reached the "Hayashi limit". This value, named after a Japanese scientist, represents the maximum size a star can be before the "equilibrium" (mentioned above) is broken. All of a sudden, the star begins fusing hydrogen atoms into helium ones. The energy resulting from this chemical reaction produces the heat and light that we're so grateful to the Sun for. 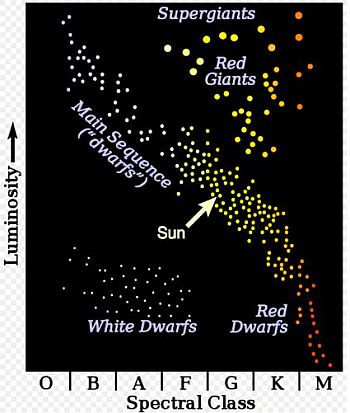 This is a simplified version of something called the Hertzsprung-Russell diagram. It shows the lifespan of stars from formation, through the main sequence and beyond.

Different Sizes of Stars in the Universe

As you can see in the Hertzsprung-Russell diagram above, all stars in the Universe are either dwarfs or giants. Giants can also exist as "supergiants" and "hypergiants". The size of some of these can be quite staggering

To give you some idea of how these giant stars compare to the Sun, check out this chart:

When you consider that the Sun, on this scale, is nothing more than a dot, you'll realise what an unbelievably huge object VY Canis Majoris is. A red hypergiant, it is one of the largest known stars and our Solar System out to the orbit of Jupiter could fit inside it.

Different Types of Stars in the Universe

At the very basic level, using colour, there are three main types of star: blue, white/yellow and red. The general rule is that the bluer the star, the hotter it is.

However, as you'd expect, things are actually a touch more complicated. Astrophysicists have categorized the stars in the Universe into seven different types and the classification, from hottest to coolest is this:

If you're thinking that this selection of classification letters is a bit random, stars were originally, in the early days of astronomy, classified with the letters in alphabetical order. When more became known about the cosmos, this classification had to be altered in accordance with increased knowledge about stars, but the original letters were retained, putting them all out of order.

There are actually three other classifications for stars in the Universe that are near the end of their lives and have become very cool indeed:

Here is a list of all types of stars in the universe, with links to new pages giving you more information about them:

The Inner Workings of a Star

The internal working of a star involves production of enormous quantities of energy. This can manifest in a number of ways - heat, light - even sound.

What causes this is a process called nuclear fusion. The adjective "nuclear" means to do with the nucleus of atoms. At this microscopic level, any reation is bound to produce huge surges of energy, illustrating the famous equation proposed by Einstein, E=mc². "E" is energy, "m" is mass and "c" is the speed of light. As the speed of light is a very large amount, to multiply it by itself makes the value of E, from any value of m, ridiculously big. The conversion of just a small amount of mass to energy results in a violent release of heat, light and sound of mammoth proportions.

What actually happens is that two nuclei of hydrogen fuse together to form a nucleus of helium. The resulting mass of this helium nucleus is less than the total mass of the two hydrogen nuclei that began the reaction, the rest having been expelled as this violent energy, the light and heat that causes the star to shine and heat up any nearby planets.

Our own Sun fuses about 620 million tons of hydrogen every second!

This nuclear fusion takes place in the core of the star and there's usually enough hydrogen to keep the star going for billions of years. There comes a time, though, when it all eventually gets used up. At this point, any nuclear activity stops, causing the core to collapse in on itself. However, there is still some hydrogen remaining in the star's outer layers, so nuclear fusion takes place there instead. Meanwhile, the core is becoming hotter and hotter, one of the results of this being that the outer layers are pushed further out - and a red giant is the result.

Different sizes of stars in the Universe can ultimately end up as different celestial phenomena. After the red giant phase, we can be left with such things as novae, or, with more massive stars, supernovae, titanic explosions that can be seen millions of light years away.

Any debris left behind by these eventually clumps together as the potential to form new stars - and the cycle begins all over again.

In certain cases, however, they may turn into neutron stars or black holes.