Hypergiant stars - the most massive, unstable and short-lived

Hypergiant stars are termed as such, once again, not because of their size. There are several criteria that they must satisfy to qualify for the title, but, even then, the distinction between them and supergiants is somewhat blurred.

For a start, they must be extremely massive - some containing as much as 150 times the mass of the Sun. Also, they have to display extremely high luminosity. Again, using the Sun as a standard measurement, these massive stars can have a brightness up to several million times that of our home star.

Thirdly, they are very unstable, for reasons explained in the next section.

Named after early 20th century British astrophysicist Sir Arthur Stanley Eddington, this limit is the maximum luminosity a star may have such that there is a balance between the force of the outward radiation caused by this luminosity and the inward force of the star's gravitational pull. Hypergiant stars often operate very close to this limit, some occasionally exceeding it.

When this happens, the star ejects a portion of its outer layer, manifesting as bursts of extra brightness. This process results in a dimming of the star during the interim periods and contributes to the star's general instability.

Compared to other stars, hypergiants are very short-lived, being restricted to life spans in the order of only a few million years.

This is the name of a star found in the constellation Carina, which is about 7,500 light years away. It generally fulfils the criteria for being a hypergiant. For a start, it's estimated to be between 120 and 130 times the mass of the Sun. Indeed, it is thought to have originally been up to 150 solar masses, when it would have been one of the Universe's most massive stellar objects, as stated above. This is in direct contrast to its actual size, which is only around 24 times that of the Sun.

Its luminosity is impressive, too, varying between one million and five million times that of our home star. Over the centuries, since its discovery in 1677 by Edmund Halley (he of comet fame), it has displayed periodic outbursts resulting in its becoming much, much brighter. This seems to be caused by the star exceeding its Eddington Limit, resulting in huge ejections of matter from its surface. 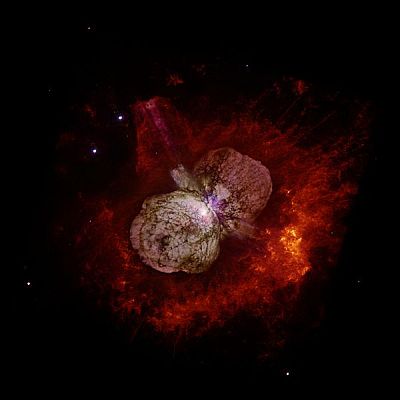 Here we have an image taken by the Hubble Space Telescope in 1995. Eta Carinae is the bright dot at the centre and the two large spherical objects either side of it are the remains of a huge outburst some 160 years earlier.

In 1843, an observation seemed to indicate that the star had exploded as a supernova, for a while becoming the second brightest object in the sky, after Sirius, despite its huge distance away. The star was subsequently observed to have survived the ordeal, so it was assumed that it had just been an extra-large outburst. Such an event was termed a "supernova imposter" and was the first of its kind ever seen. 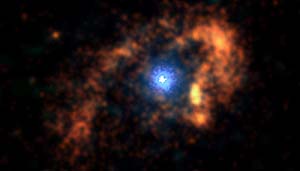 Another image, taken by the Chandra X-ray Telescope, showing huge clouds,
in orange, the result of another outburst around 1,000 years previously

Although they are found right at the top of the Hertzsprung-Russell Diagram, hypergiant stars can fall into several different categories.

These "luminous blue variables" do pretty much what it says on the tin: they're luminous, blue and variable. The "blue" description comes from their high temperatures, they are extremely luminous and this may vary considerably over their brief existence.

Very rare stars, as well as hypergiants, they can include blue supergiants. The above mentioned Eta Carinae is an LBV.

Astronomers have studied the handful of blue hypergiant stars in the Milky Way Galaxy and come to a few tentative conclusions. They could be either very massive stars in an unusual evolutionary stage, or the result of a merger (of two or more stars) in an early evolutionary stage.

Apparently, blue hypergiants seem to occupy a place on the Hertzsprung-Russell Diagram between blue supergiants and luminous blue variables. Typically, they are part of the normal evolutionary phase for stars with masses greater than 30 times our Sun.

This category features the largest known stars in the Universe. These are vast, bloated objects nearing the end of their lives. Displaying class M spectra, they form from stars with greater than 40 solar masses.

The largest yet discovered, VY Canis Majoris, is a red hypergiant star. Estimates as to its actual size vary, but it is at least 1,300 times the size of our Sun.

These are, by far, the rarest stars in the Galaxy - and probably the whole Universe, chiefly because of their incredibly short lifespan. We're talking mere thousands of years, as opposed to the millions, billions or even trillions of years' lifespans of other stellar bodies.

Yellow hypergiants are found towards the top of the Hertzsprung-Russell Diagram, in the middle, which covers spectral classes A, F, G and K. They are just above something called the "instability strip", an area containing relatively few stars that are extremely unstable. Above their area is another quaintly named zone - the "Yellow Evolutionary Void". Stars that evolve into this area also become very unstable, shedding vast quantities of their masses.

Some yellow hypergiant stars may be within a short phase as they evolve from red to blue. Others may actually be very hot stars, but with a "pseudo-photosphere", which is a lot cooler, thus manifesting as yellow.