Red Dwarf Stars - the most abundant in the Universe

Red dwarf stars are more properly known as M-type main-sequence stars, with the designation M V. The "M" means that they have a surface temperature less than 4,000 degrees Kelvin. The Roman numeral "V" signifies a main-sequence star. "Main-sequence" refers to stars that fuse hydrogen into helium. 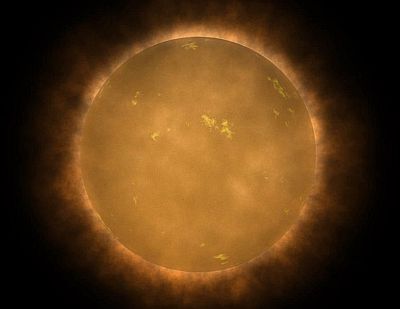 The phrase "red dwarf" is quite famous, of course, due to the celebrated sit-com of the same name. As you can see from the above image, far from being red, these stellar objects are more of a dirty orange colour. They're quite dim, due to their low temperature, but observations have determined that they are extremely abundant in the Universe. Indeed, they are thought to comprise three-quarters of the total stars in the Milky Way Galaxy. Our nearest stellar neighbour, Proxima Centauri, is a red dwarf.

As well as being dim, they are quite small. At most, they can be half the size of the Sun, but they can be as small as one-tenth. They can outlive a yellow dwarf such as our Sun by many factors. It is thought that they will remain within the main-sequence for several trillion years. The Universe hasn't been in existence long enough for any red dwarfs to have reached an advanced evolutionary state.

The spectral type "M" can be further subdivided into grades of temperarute, using the numbers zero to nine, or hottest to coolest. There has been a lot of contention over the decades as to what stars should represent each of these subdivisions, but the latest list is as follows: