For a stellar object to be categorised a "supergiant star", the criterion, paradoxically, is not necessarily its size. Astronomers tend more to consider the mass of the object, which is totally independent of its dimensions. Also, there are several other parameters to be taken into account.

Supergiants have a minimum mass of ten times that of the Sun, but may contain far more than that. They tend to be situated towards the top of the Hertzsprung-Russell Diagram, which is a graph depicting star development. They can be found in every spectral class from O (blue) right through to M (red). Their "luminosity", or brightness, is classed as Ia and Ib and may, in certain stars, be up to one miilion times that of the Sun. Surface temperatures vary from 3,500 degrees Kelvin to as high as 20,000.

The most interesting factor for you, probably, is the actual size of these things. Supergiant stars can be up to 1,500 times the size of the Sun.

As has been hinted above, these giant stars can be either red or blue.

Blue supergiant stars are generally smaller than red ones. They're found towards the upper left corner of the Hertzsprung-Russell diagram generally within spectral class B. Their surface temperatures range from 10,000 to 50,000 degress Kelvin and they are at least 10,000 times brighter than our Sun.

Depending on their mass, the evolutionary path they follow can go two different ways.

Those with lower mass (say, 10 to 40 times the mass of our Sun) are quite unstable and will quickly expand to become a red supergiant. This then will blow off its outer layers, evolving back to a blue supergiant. This process may be repeated a number of times, with the star ultimately exploding as a type II supernova, or, much more rarely, becoming a luminous blue variable.

Those with higher mass (40-100 solar masses) are too luminous to become red supergiants. One that is stable enough may evolve into a Wolf-Rayet star, eventually becoming a white dwarf. Another may reach the Wolf-Rayet stage before exploding as a supernova. Yet another may just go supernova straight from the blue supergiant stage. Actual astronomical observations have yet to produce definitive results on these options. 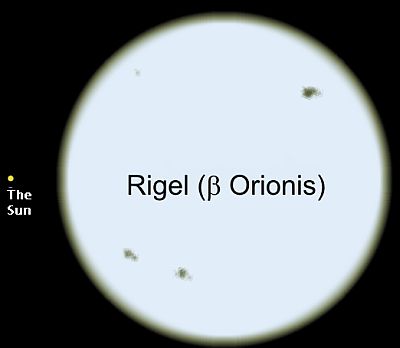 The blue supergiant star, Rigel, compared in size to our Sun

These stars, on the other hand, produce amongst their ranks the largest stellar objects ever discovered. Red supergiant stars occupy the top right area of the Hertzsprung-Russell diagram, making them spectral class K or M.

When stars with greater than 10 solar masses use up all the hydrogen in their cores, they begin fusing the resultant helium, at the same time expanding in size dramatically. The red supergiant phase is very brief, cosmologically speaking - only between 10 and 100 million years. Due to their internal reactions, they display huge variances in brightness.

As their red colouration would suggest, their surface temperature is very low for a star - 3,500 to 4,500 degrees Kelvin.

Most red supergiants are between 200 and 800 times the size of the Sun. However, a few have been discovered that are 1,500 times as big. Just to put that into perspective, their radii are seven times larger than the distance from the Sun to Earth.