The simplest definition of a variable star is one that, when viewed from Earth, appears to fluctuate in brightness with some sort of regularity. Even our own Sun could be considered one, as its eleven-year sunspot cycle causes minute changes in luminosity. However, the ones we'll be examining here are a lot more dramatic than that.

There are two major types of variable star: ones that pulsate due to internal interactions, which are called "intrinsic" and ones that periodically dim due to external mechanisms, such as a companion stars passing in front of them and they are "extrinsic".

This page will concentrate more on the different types of intrinsic variables, of which there are three main groups. 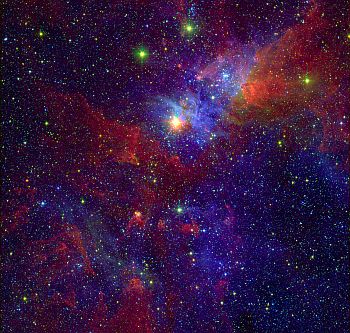 These type of stars are constantly expanding and contracting, to various degrees of brightness and time scales. They can be either "radial", in which the star expands uniformly, thus remaining spherical, or "non-radial", where only part of the surface expands.

This group can be further subdivided as follows:

These are massive objects that can have a luminosity between 500 and 300,000 times that of our Sun. They have quite a fast fluctuation rate of anything from one to 100 days.

These are pulsating variable stars whose fluctuations in brightness have a very short cycle - the longest being just over one day, the shortest a mere hour. They are white giants that are older and less massive than cepheids.

These yellow supergiants are characterized by huge changes in their brightness in cycles of anything from 30 to 150 days.

As the name suggests, these have fluctuations over long spans of time, anything up to 1,000 days. They are red giants or supergiants and this class can be further subdivided into Mira and Semiregular.

Again, as the name suggests, these stars have no regularity in their cycle of fluctuations. Most red giants fall into this category.

Look up the word "cataclysm" in the dictionary and you'll see it refers to "a sudden and violent physical reaction" (dictionary.reference.com). It is exactly this phenomenon that these types of variables display. Some of the most violent events in the Universe fall into this category and they're quite famous.

These, as anyone with a rudimentary interest in astronomy probably knows, are extremely violent outbursts of light and energy formed when a giant star collapses in on itself at the end of its life. These occurrences can often temporarily turn the star into one of the brightest things in the heavens.

The increase in brightness is very sudden, astronomically speaking and can make the object at least 20 times more luminous.

Happening because of an interaction between two stars in a binary system, this phenomenon is a result of the dominant white dwarf drawing matter from its less massive partner. The result is to cause the dwarf's brightness to increase up to sixteenfold. This can happen over anything between one and 100 days.

The brightness will gradually reduce thereafter, back to normal within a matter of years or decades.

These are simply novae that have two or more increases of brightness during their lifetimes.

Usually consisting of a pairing of a red and white dwarf, surrounded by an accretion disc. Material from the disc is drawn into the white dwarf, causing the increase in luminosity.

Eruptive variables display violent reactions within their atmospheres, such as stellar flares. The changes in brightness are usually accompanied by strong stellar winds.

Stars within this category include LBVs (luminous blue variables) and yellow supergiants.