The Scattered Disc (or Disk) is the name given to a collection of small, icy objects out in the far reaches of the Solar System. It begins at the outer edge of the Kuiper Belt (at about 2,800 million miles from the Sun) and extends as far out as 10,000 million miles.

Typically made up of water ice or frozen methane, the objects within the Disc are quite tiny, the biggest being Eris, which has sufficiently large dimensions to classify it as a dwarf planet.

Because the Disc, in places, overlaps the Kuiper Belt, some astronomers maintain it is an extension of this belt. But the two areas are different in the properties of their members. The Minor Planet Centre states that the Kuiper Belt contains bodies in stable orbits, whereas the orbits of Scattered Disc objects are wild and random. 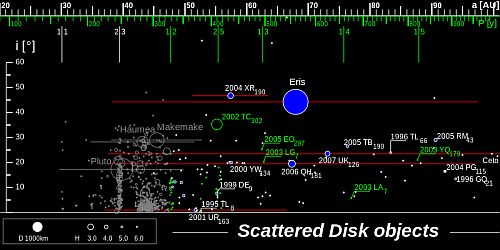 One feature of the wild orbits of objects within the Scattered Disc is their inclination out of the plane of the Solar System. This chart shows both this and the distances of the objects from the Sun. Over on the left you'll see a clutch of grey dots, representing the Kuiper Belt (within which are the dwarf planets Pluto, Haumea and Makemake). Then, moving to the right we have a collection of Scattered Disc objects, with Eris featuring prominently.

The line across the bottom represents the plane of the Solar System and the heights of the objects above it show how much each one is inclined out of this plane. As you can see, Eris is quite prominently inclined, but not quite as much as the SDO 2004 XR190. This small object, nicknamed, for some reason, "Buffy" has the most inclined orbit of any body in the Solar System. 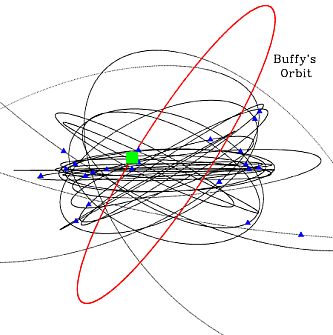 This may put it more into perspective for you. Buffy's orbit is highlighted in red.

Back to the first diagram, the red lines on either side of some SDOs denote their varying distances from the Sun, in astronomical units (which each equal 92,955,806.8380657 miles). The longer the lines, the more elliptical the orbit. As you can see, Buffy's lines are quite short. In fact, the object traces an almost circular orbit around the Sun. To do this and have such an inclined orbit does not comply with known celestial mechanics, so Buffy is proving something of an enigma to astronomers.

The Formation of the Scattered Disc

It's not known for certain how this sparse selection of small objects with their crazy orbits came to be there. The prevailing explanation proposes that Neptune was much closer to the Sun when it was first formed. As the Solar System developed, the combined gravitational effect of Jupiter and Saturn gradually sent Neptune further out, until it crashed into the Kuiper Belt (whose origin is a mystery, too).

This action had the effect of scattering some of the KBOs far and wide, creating the Scattered Disc as we know it. Even today, the motions of the objects within it can still be strongly affected by Neptune.

It was originally thought that short-period comets (those that orbit the Sun in 200 years or less) originated from the Kuiper Belt. Now, the general consensus is that, when they're not approaching the Sun, they reside within the Scattered Disc. It makes more sense when you think about it. Objects with crazy orbits are more likely to be sent by Neptune's gravity heading off for the inner Solar System than the more orbitally settled ones within the Kuiper Belt.

Even though the famous Halley is a short-period comet, it is thought that it originally came from the Oort Cloud, which lies much, much further out than the Scattered Disc. Other, similar comets are said to belong to the "Halley family". There is another group of comets called the "Jupiter family" and they are believed to originate from the Scattered Disc.

These objects, also known as "Extended Scattered Disc Objects" are bodies that have huge elliptical orbits that take them far into the depths of deep space.

The actual, true definition of these things is that, during their approach to the Sun, they are not affected by the gravity of Neptune, or indeed any of the Solar System planets. They are, in effect, "detached" from the Solar System.

Only nine of these objects have been discovered so far, the largest being Sedna, which has its own page on this site.