The Moon Miranda - the innermost of the main moons of Uranus

The moon Miranda is the innermost of the five main moons of Uranus. With a diameter of only 293 miles, it is also, by far, the tiniest. It lies 80,400 miles out from its host planet, which it orbits in 1.4 days. 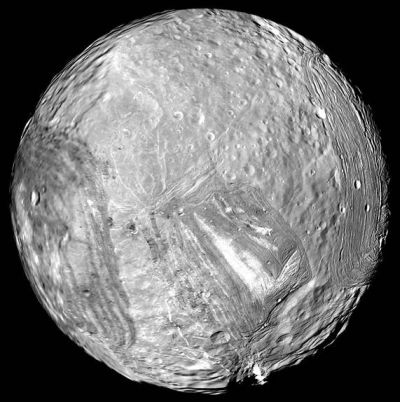 As you can see, its surface looks like it's had a considerable battering. The moon is so remote from Earth that observation is difficult and the only decent images of Miranda were taken by the NASA probe Voyager 2, during its flyby in 1986. At the time, only Miranda's southern hemisphere was visible. Still, it shows that the moon has experienced more geological action than any others in the Uranus system.

Although it is not known for certain, it is thought that the moon Miranda is made mostly of water ice, with a core of silicate rock containing organic compounds.

The orbit of the moon, apparently, has been drastically affected in the past by gravitational interaction with its neighbouring moons Umbriel and Ariel. This, coupled with tidal forces from Uranus itself, resulted in internal heating, geological activity and an eccentric orbit.

Miranda has huge canyons criss-crossing its entire surface, possibly formed by fracturing. It also has its fair share of craters and cryovolcanoes, which spew out ice magma. 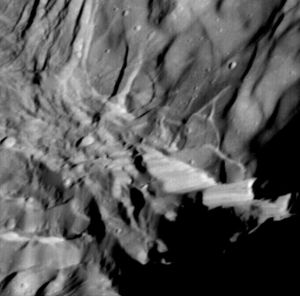 This closeup of the surface shows "Verona Rupes", a huge scarp that could be over three miles high. Miranda also displays parallel grooves and egg-like structures that scientists have christened "coronae".

All the "pulling about" of Miranda's orbit by neighbouring moons and Uranus has resulted in it being some four degrees out of the equatorial plane. This is some ten times more than all the other main moons. This is also very unusual in an object so close to its host planet.