Spiral Galaxies - the most common in the Universe

"Spiral galaxy", as a name, is pretty much self-explanatory. It is an object consisting of stars and dust with a central bulge from which two or more spiral arms extend. They are quite bright, being populated by comparatively young stars and appear to be the most abundant in the observable Universe. 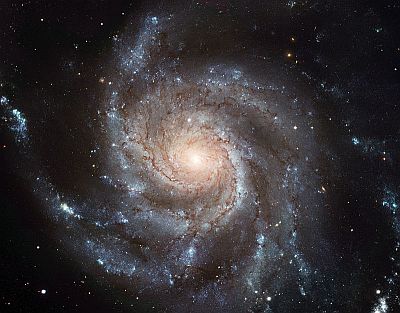 This is a fine example of such a galaxy. It is known variously as Messier 101 or NGC 5457, and also has a more colloquial nickname - the "Pinwheel" Galaxy. The bright central bulge is easily seen, as are the spiral arms. What is not so apparent is a faint halo of stars, into which the spirals extend. It is also thought that spiral galaxies feature a supermassive black hole at their centres and are surrounded by an almost spherical halo of dark matter. 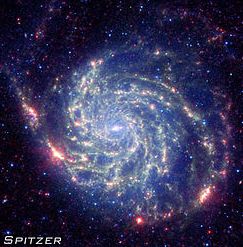 This is an image of the same galaxy in infra red, showing quite nicely the dust trails, where stars are born. 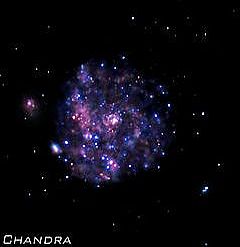 Here we see it again, this time in X-ray light. This reveals high-energy events, such as exploding stars and high speed collisions of objects near the central black hole.

Spiral galaxies have the Hubble classification "S", followed by a, b or c, according to how tight the spiral arms are, "a" being the tightest. 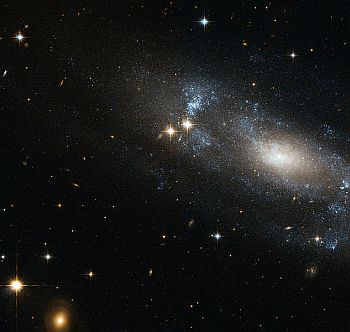 Here we have ESO 499-G37, a good example of a loose galaxy, classification "Sc".

The problem with the spiral arms is so complex that it deserves its own section on this page. Contrary to logic, the stars in a spiral galaxy orbit the centre at a different rate than the arms. This has been deduced because of something that has been termed the "winding problem". It is thought that stars fixed within the spirals would cause them to wind tighter and tighter and this is not what is observed. The stability of a spiral galaxy's arms is still a puzzle, but there has been a theory put forward.

Study of the phenomenon was initiated as far back as 1925 by Swedish astronomer Bertil Lindblad. He proposed that the arms were merely areas of the galaxy with greater density and stars would periodically pass through them. He christened these areas "density waves". He also speculated that, when clouds of gas encountered the waves, the effect of the extra density would be to compress the gas, resulting in star formation. Young, newly-formed stars shine very brightly, accounting for the illumination of the arms.

That's an intriguing headline isn't it? It's merely the two names of the scientists who improved on Lindblad's theory. Chia-Chiao Lin, a Chinese-born American mathematician and Frank Shu, an American astronomer, put forward a paper in 1964 entitled "On The Spiral Structure Of Disk Galaxies". It, as you can imagine, contained some pretty advanced mathematics, so here is a really dumbed down version of what they suggested:

The theory assumed that stars travelled round the galaxy in slightly elliptical orbits, rather than perfect circles. These ellipses had to be in a precise arrangement, represented in this diagram: 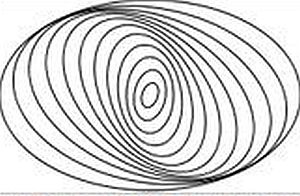 This shows how stars' orbits periodically approach each other in such a way to create the waves, while allowing the stars to move in and out of them.

It's an ingenious theory, I think you'll agree, but that's all it currently remains - a theory.

Nearly two-thirds of all spiral galaxies are "barred" - i.e., the central bulge takes the form of an elongated bar. It is also known that, earlier in the life of the Universe, there were far fewer than today. It appears that the "bar" stage is merely a part of the evolution of galaxies. 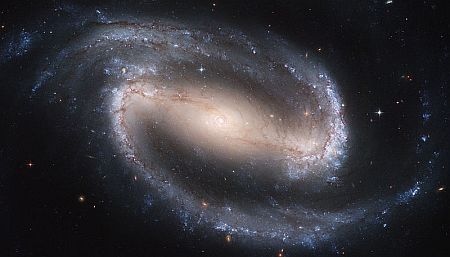 This is barred spiral NGC 1300, photographed by the Hubble Space Telescope. These types of galaxy have the Hubble designation SB and, once again, are either a, b or c, according to the tightness of the arms. Our own Milky Way was first considered to possibly be a barred spiral in the 1990s and finally confirmed as such in 2005.

Bars are formed at the centre of galaxies as a direct result of the density wave, discussed above. It is currently accepted that they tend to attract gas from the spiral arms through the mechanism of orbital resonance.

This turns the bar into a star nursery as the gas is compressed, making ideal conditions for the creation of new stars. In time, the bar ends up with so much mass that it breaks up, returning the galaxy to a normal spiral.

This is a comparatively new classification of spiral galaxies, named after the prototype, the Large Magellanic Cloud, pictured here: 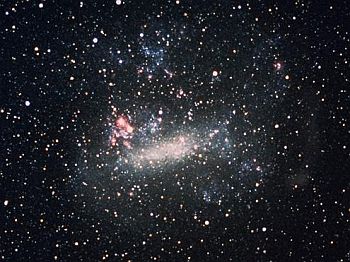 They sort of break the rules regarding galaxies, because, firstly, they only possess one spiral and, secondly, they are not symmetrical, but lopsided. The lack of symmetry can be easily explained by the fact that these galaxies are usually found near to another, larger galaxy. The galaxy in the image is a satellite of our own Milky Way. The gravitational effect of the greater object causes this distortion.

They have a new category in the Hubble classification, being designated SAm (unbarred), SBm (barred) and SABm (intermediate).