Space Roar - why is the Universe shouting at us?

Space Roar is the fanciful name given to a Universe-wide phenomenon that, so far, defies any explanation as to what it is or what's causing it. Before we look into it more deeply, here's a bit of background.

A lot of you may know this already, but it does need clarifying. The heading "electromagnetic waves" includes light, radio, X-ray, gamma ray, infra-red and ultra-violet. They're all essentially the same thing. The only thing that defines them is their wavelength. So, if the wavelength of a light wave were stretched sufficiently, it would turn into a radio wave.

Now, light from the most distant galaxies - those right on the edge of the observable Universe - sets off towards us, but, due to a combination of the distance involved and the expansion of the Universe, the wavelengths become stretched as they travel over immense distances and arrive at Earth as radio waves.

Thus, these unbelievably distant galaxies cannot be seen as light; they can, however, be heard by radio telescopes.

This is an acronym for Absolute Radiometer for Cosmology, Astrophysics and Diffuse Emission, no less. It was a NASA project in 2006 and involved a canister containing seven radiometers tethered to a balloon that reached an altitude of 120,000 feet. 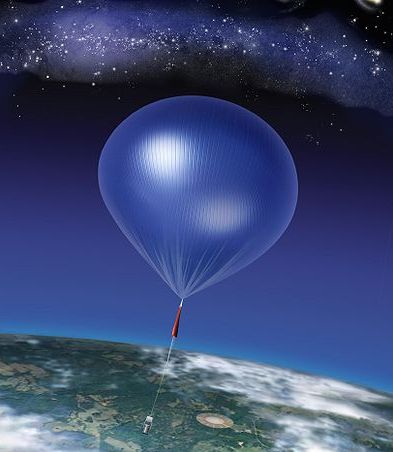 The idea was, specifically, to monitor radio emissions from the most distant galaxies, without the interference of Earth's atmosphere. It's generally known that, the further out into the Universe you look, the further back in time you will be seeing, so ARCADE would be listening to conditions shortly after the Big Bang.

What was actually heard was something totally unexpected. Permeating the Universe was a strong radio hiss, about six times more powerful than anyone expected. No-one knew what it was or what was causing it. This was eventually christened "Space Roar" and remains one of the "Great Unsolved Problems in Physics".

Another downside to this phenomenon is that the hiss effectively masked the faint radio emissions from those distant galaxies - which was the original point of the mission.

What Could Be Causing It?

The short answer to that is, nothing in the known Universe has the potential to generate a radio signal of such power. Even if the entire Universe was crammed full of radio galaxies, it still wouldn't come close to the strength of the Space Roar. As the head of the ARCADE team, Dr Alan Kogurt, put it: "The energy alone that could generate this level of signal is incomprehensible".

There has been a theory put forward that would explain the strength of the radio hiss, but, before we reach that, we need to consider a few other things, to set the scene. I expect you'll wonder where this is leading, but stay with me.

The Game of Life

This is a mathematical exercise developed, in 1970, by British scientist John Conway. The universe of the game was an infinite two-dimensional grid of squares, or "cells", which existed in two possible states - alive or dead.

There were four rules in this universe:

The idea was to set this in motion, then sit back and watch the results. From the grid's initial state, you'd expect the development of it to be pretty chaotic, but, due to the set of very exact rules, regular patterns start to emerge.

John Conway's "Game of Life" is an example of something called a "cellular automaton".

Is the Universe a Gigantic Cellular Automaton?

Some physicists have proposed the idea that the whole Universe could actually be (in principle at least) a gigantic cellular automaton. A branch of science known as "digital physics" has emerged to describe it.

It suggests that a simple computer program is all that is necessary to evolve a universe such as the one we inhabit. The sub-atomic particles from which everything is made are likened to simple computer "bits". A quantum shift of a particle from one state to another is compared to a "bit" changing value (for example going from 0 to 1).

This idea also includes the potential of other universes (the "multiverse").

What's All This Got To Do With Space Roar?

I'm finally getting to that. The automaton Universe idea is comparable in some ways to M-theory (a special branch of string theory), which also allows for the existence of alternate universes.

Within that context, three hypotheses have been proposed by American physicist David Brown. 1, the maximum length of an electromagnetic wave is the Planck length multiplied by the Fredkin-Wolfram constant (a constant associated with the cellular automaton idea). 2, M-theory actually describes the Universal cellular automaton. 3, real photons are constantly leaving our Universe to enter an alternative one, being replaced with virtual photons coming the other way.

So, in the very early Universe (which ARCADE was attempting to monitor), there was a much greater amount of real matter than there is now. This would result in much more powerful radio noise, which is what the probe found. This would account for the Space Roar.

If this is the case, it would also imply that the Universe is, indeed, a huge computer.