Saturn's hexagonal storm may a bit of a puzzling header for you. A storm that is hexagonal? You know, like honeycomb. How can this be?

Well, it's a fact that, around Saturn's north pole, a huge storm is raging and its walls form the shape of a perfect hexagon! 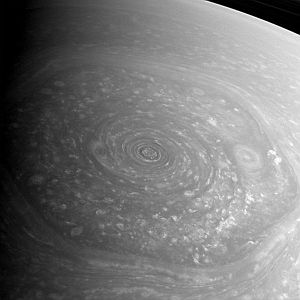 The remarkable feature was first discovered in 1980, by the NASA probe Voyager. The sides of the hexagon are estimated at around 8,600 miles in length - greater than the diameter of Earth. Observations over a period of years show that, unlike other cloud formations in the area, this storm is staying put. This alone is unusual.

In 2006, the NASA probe Cassini photographed the hexagon using its visual and infrared mapping spectrometer, which was able to obtain an image during Saturn's nighttime. 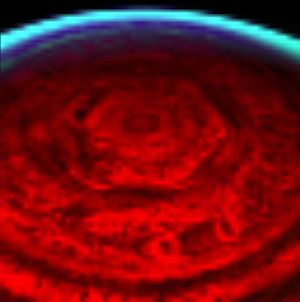 The red sides of the hexagon indicate that they are breaks in the clouds (showing up as dark areas) and are estimated to extend nearly 50 miles into the planet's interior.

The whole structure is rotating at a rate of 10 hours, 39 minutes and 24 seconds (now that's accurate), which, apparently, is the same as the rotation period of Saturn's interior.

Is This Phenomenon Found Anywhere Else?

It is said that this phenomenon is only replicated, to some extent, on planet Earth, of all places. There have been observations in the Southern Ocean of hexagonal cloud formations. 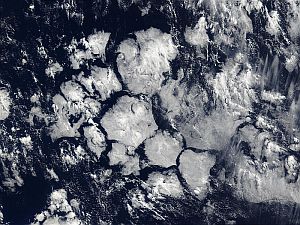 These are formed by complex combinations of atmospheric conditions. As impressive as they might seem, they don't hold a candle to the magnificent storm on Saturn. They're not even perfect hexagons!

Scientists have also replicated this phenomenon in the laboratory by swirling liquids at various speeds. Let them try making one that is over 16,000 miles across!