Ring Galaxies - some of the stranger sights in the Universe

Ring galaxies are a remarkable sight. They are basically what it says on the tin - a yellowish nucleus of older stars, surrounded by a comparatively empty space, bounded by a ring of hot, blue stars. 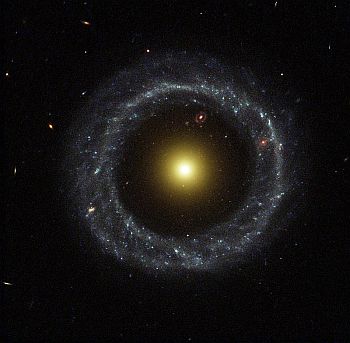 Here we see a fine example. Known as "Hoag's Object", it is named after Arthur Allen Hoag, who discovered it in 1950. It is situated in the constellation Serpens, about 600 million light years distant. These phenomena are pretty rare in the Universe, so it is quite unusual to see that, at about the one o' clock position, there can be seen another ring galaxy in the distance.

Astronomers are divided as to the mechanism that forms these objects. Some consider that they are the product of a small galaxy passing through the centre of a large one, with the resulting gravitational turbulence producing the ring. Others suggest accreted material from an external source could have the same effect. 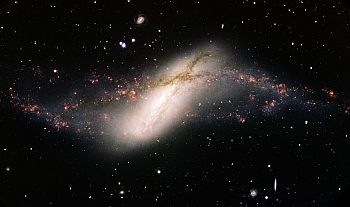 This fine image shows NGC 660, an example of a polar-ring galaxy. It is distinguished from the normal ring type in that the ring goes around the poles of the central mass, instead of the equator. Found in the Pisces constellation, at around 45 million light years away, it is thought to have originally been a regular disk galaxy which captured material from another  passing galaxy and this material gradually became "strung out", forming the ring.

This galaxy is worth a mention, because its discoverer, Fritz Zwicky, commented that it was "one of the most complicated structures awaiting its explanation on the basis of stellar dynamics". 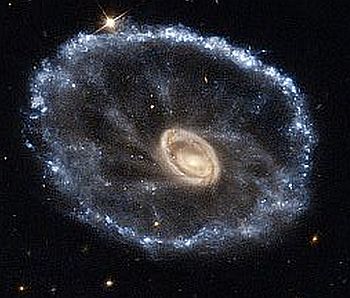 Found in the constellation Sculptor, 500 million light years away, it also demonstrates nicely how short term these galaxies are, relatively speaking. The Cartwheel is already starting to gradually change to a spiral galaxy and the beginnings of several faint spirals can be clearly made out.