Elliptical Galaxies - how they form is still a mystery

An elliptical galaxy is so-called simply because it is shaped like an ellipse. If you look up "ellipse" on dictionary.com, you'll find the definition is "A plane curve such that the sums of the distances of each point in its periphery from two fixed points, the foci, are equal. It is a conic section formed by the intersection of a right circular cone by a plane that cuts the axis and the surface of the cone".

To dumb things down from that jargon from the discipline of geometry, the perfect example of a three-dimensional ellipse is a sphere. Other ellipse shapes may be elongated versions of this, like eggs or rugby balls.

We can further dumb down by saying: an elliptical galaxy, through a telescope, looks like a blob.

This image shows this quite nicely. Elliptical galaxies consist of a mass of stars with random orbits round the centre of gravity. I know this is stating the obvious, but they are distinguished from spiral galaxies in that they have no discernible spirals. Within the Hubble classification system, these galaxies are designated E, which is then subdivided from zero to seven. Zero is circular (or spherical) and seven is the most stretched out. Messier 32, above, is E2.

Ellipticals are not the most common in the Universe (that distinction goes to spiral galaxies). They mainly consist of old stars and, as a result, are quite dim and difficult to detect. That's probably why the general image of the Universe we have is being full of spirals, which are a lot brighter and easier to observe.

These objects can vary greatly in size. There are such things as dwarf elliptical galaxies and the smallest example yet discovered is about one-tenth the size of the Milky Way. At the other end of the scale, we have IC 1101, a super giant at the centre of the Abell 2029 galaxy cluster. With a diameter of 6 million light years, 50 times the size of the Milky Way and containing a trillion stars, it is the largest galaxy yet discovered. 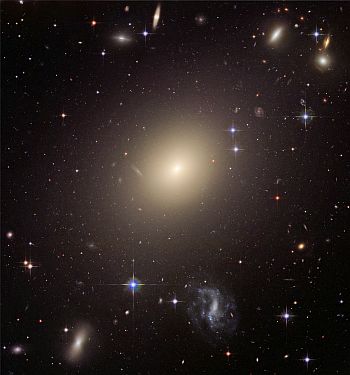 How these galaxies are formed is still a matter of conjecture, but a tentative theory is that, when two spiral galaxies collide (which happens relatively frequently) the result is an elliptical. In a few billion years' time, our own Milky Way will collide with the Andromeda Galaxy and an elliptical will be born (theoretically).