Dark Energy - no-one has a clue what it is

Dark energy is something that comprises around 70% of the total mass of the Universe. Trouble is, no-one has any idea what it actually is.

Let's start at the beginning (almost literally). Shortly after the Big Bang, the young Universe suddenly experienced a period of rapid expansion. It was extremely rapid too, growing from something the size of an orange to many millions of light years across. Then, thankfully, it seemed to start slowing down. The general consensus of astrophysicists was that the gravity exerted by the matter in the Universe would keep slowing down the rate of expansion, but never eventually stop it.

Then, in 1998, all this went out of the window, due to observations by the Hubble Space Telescope.

The HST was attempting to make an accurate estimate of the rate that the expansion of the Universe was slowing by studying the faint light from extremely distant supernovae. This would enable scientists to calculate its expansion rate back in the early days of the Universe and compare this to its rate today. What was discovered completely floored the scientific community.

It appeared that today's rate of expansion is greater than it was billions of years ago. The expansion is accelerating! This couldn't be right! Gravity should be slowing it down!

There must be a mysterious "energy" that, somehow, is driving the Universe apart - but what is it? In the absence of any better ideas, it was christened "dark energy".

What it actually is, is one of the "great unsolved problems in physics". 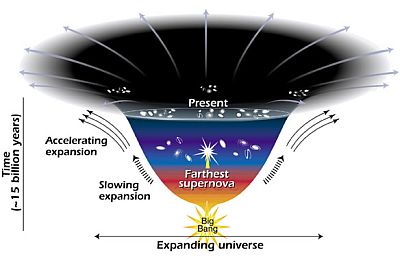 This graphic shows the rate of expansion of the Universe. You can see the sudden expansion shortly after the Big Bang, then the slowing down effect produced by gravity. But, at roughly five billion years ago, the Universe's expansion suddenly began to speed up. It is thought that it was at this point that dark energy became the most dominant force in the Universe.

The effects of dark energy mean that it must be exerting a constant negative pressure throughout the Universe. There have been two hypotheses as to what it actually might be.

This is the theory that space itself possesses energy (sometimes called "vacuum energy"). It's called "cosmological" because it pervades the whole cosmos and the "constant" bit implies that it always stays the same, unlike a force such as gravity, which lessens over distance.

There's one problem (isn't there always). Quantum theory has attempted to explain how space acquires energy by suggesting that, far from being empty, space is full of virtual particles that constantly pop into and out of existence, thus creating an energetic field. Trouble was, the calculations suggested resultant energy levels that were many millions of times too large. It's still a mystery, then.

It sounds like something to do with alchemy or medieval medicine, doesn't it? It's another theory to explain the mysterious force and suggests that the whole of space is filled with a dynamic fluid or energy field that has an opposite effect to normal matter and energy. The main difference between it and the cosmological constant is that it can change over time. As it has been called by some physicists the "fifth fundamental force", it was named after the fifth element mentioned in Ancient Greek philosophy.

Even if dark energy is quintessence, we still don't know what it is or why it exists.

This is a theorized form of dark energy that is considerably more potent. The suggestion is that the repulsive force exerted by the dark energy could keep increasing exponentially until it became infinite.

The result would be bad news for our Universe. Its expansion would grow ever more swiftly until it was actually faster than the speed of light. The observable Universe would appear to shrink, then the phantom energy would tear apart all the galaxies, including our own Milky Way. On it would go, eventually tearing apart molecules, atoms and all sub-atomic particles before destroying the Universe completely in a "Big Rip".