Antimatter - where is it all?

Antimatter is simply matter that is made up of antiparticles. These are objects that have an opposite electrical charge to their matter-based counterparts.

All subatomic particles have been proved to have their anti- equivalent. Thus, an anti-electron is the opposite number of an electron and has been called a positron.

It is one of the greatest unanswered questions in physics, as to why there is so much matter in the Universe and so little antimatter. At the time of the Big Bang, it is thought that there was an equal amount of each. Any contact between the two would result in mutual annihilation, so why is there, in the present Universe, so much of one and hardly any of the other?

The currently accepted theory is that, in the early Universe, a number of mysterious interactions occurred, which resulted in tipping the balance in favour of matter. This is a bit of a cop-out, I know, but there you go.

How Do We Know There's Hardly Any?

When a particle and its corresponding anti-particle collide, they destroy each other, the result being a strong burst of gamma rays, which are detectable by radio telescopes. If there were structures in the Universe comprised of antimatter, they would have to have contact with matter sooner or later, thus releasing the gamma rays. Astronomers have detected no such bursts.

This is not to say that, in the Universe beyond what we can actually see, there aren't any such structures.

How Do We Know It Exists, Then?

Small amounts of antiparticles have been discovered to exist in nature. Positrons are created during a certain type of radioactive decay, as are antineutrinos; they have also been detected at the top of thunder clouds; antiprotons have been proved to be present in the Van Allen Belts that circle the Earth.

Various antiparticles have also been created in the laboratory. Positrons, antiprotons and antineutrons have either formed spontaneously as the result of experiments or been deliberately created.

CERN, in Switzerland (the home of the Large Hadron Collider), has managed to create anti-hydrogen atoms. Anti-helium atoms have been observed in the outcome of an experiment dating back to 1970.

An alternative concept of cosmology, explaining the absence of antimatter, was proposed by Hannes Alfven and Oskar Klein in 1971. They suggested that there was, in fact, equal quantities of the two types of matter, but they were separated into "bubbles" by ribbons of plasma which they termed "ambiplasma". The idea was that these ribbons were double-layered electromagnetic fields, one layer positive, the other negative. They didn't annihilate each other because the particle density was too low and the temperature was too high.

This appeared to offer a solution to the problem as to why there's so much more matter in the Universe than antimatter. Alfven suggested that we lived in one of these "bubbles" that just happened to favour matter. Also, annihilations at the boundaries of the ambiplasma would cause the bubbles to increase in size, thus making the Universe appear to expand, as our current observations indicate.

This theory was disputed in 1993 by Jim Peebles, who pointed out that it didn't allow for the presence of the Universe's Cosmic Background Radiation. Also, annilhilations at the boundaries of the ambiplasma would produce enormous bursts of high energy photons and such phenomena have not been observed. A simple answer to that would be that the bubble in which we live is actually far larger than the bit of the Universe we can see. This, of course, cannot be proved one way or the other.

This is the concept of cause and effect being reversed. In other words, that an effect can happen before its cause. Or, in a more extreme form, that things can travel backward in time. This weird supposition has been proposed by renowned American physicist Richard Feynman to possibly relate to antimatter.

Let's imagine particles suddenly travelling backward in time. Any that previously attracted others would now appear to repel them. In other words, the particles would now display the opposite electrical charge - or become an anti-particle. As anti-particles have been shown to exist, Feynman suggested that they were actually particles travelling backwards in time! There were, therefore, no annihilations, just two manifestations of the same particle. 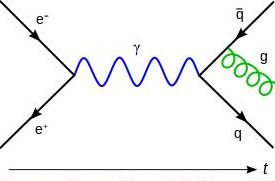 This Feynman diagram shows the process. Time is moving from left to right. An electron appears, upper left. It suddenly starts to travel backward in time, becoming a positron. This action produces a "virtual" photon wave, which in turn produces a quark and antiquark. From the antiquark, a gluon is ejected (the green squiggle). As if the concept of particles travelling backward in time wasn't enough to get your head round, here's something that might arise from that that's even more weird:

If the above is true, then there is no creation or annihilation of particles, just a change of direction forward and backward in time. This, coupled with the fact that all electrons are 100% identical, has produced the extraordinary suggestion that there is only one electron in the whole Universe!

This, at first sight, crazy assertion was first made by Richard Feynman's mentor, John Wheeler, as early as 1940. As all electrons have a "world-line" - that is, their passage through space-time - and, if the time reversal theory was correct, then there could just be one solitary electron in the entire Universe, with an extremely complicated world-line, extending right back to the Big Bang. In other words, one electron would be darting around, forward and backward in time, seemingly being everywhere in the Universe at once!

If this isn't really weird stuff, I don't know what is.

The existence of these things along with antimatter comets has been debated since the 1940s. If they do exist, they can be used to possibly account for certain phenomena and events from the past, some of which may surprise you.

In 1908, a huge explosion occurred in the upper atmosphere over the Tunguska area of Russia. It was 1,000 times more powerful than the atomic bomb dropped on Hiroshima and is the largest such event in Earth's recorded history.

In 1958, Philip Wyatt, of Florida University, suggested that the object could have been an antimatter meteor. Initial reaction was that anything containing antiparticles would have been annihilated long before it got so close to our planet, but later studies showed that, with certain proven mechanisms, this was, in fact, possible.

The mutual annihilation of the two types of matter would certainly have resulted in the blast being so powerful.

This is a mysterious phenomenon that no-one can explain. Usually occurring at the same time as thunderstorms, it consists of a ball of glowing material varying from one centimetre to several metres across. It may hover stationary or move around. There are reports of these balls entering houses and airplanes, sometimes eventually leaving. After anything like a second to several minutes, the object usually explodes.

As I said, no-one can offer an explanation as to what it actually is, or what causes it. No less than 15 different theories have been put forward to account for it, one being antimatter meteors.

The theory goes that a fragment of such a meteor would manage to approach close to Earth due to being shielded from annihilation by a kind of quantum barrier. On its way, positrons would be expelled, resulting in the fragment being negatively charged. As, during a thunderstorm, the ground is positively charged, this would increase the force drawing it in towards the planet. In this scenario, the eventual potential for annihilation is slowly made possible. Whereas a normal particle/antiparticle annihilation is instantaneous, this slowed down action is what produces this rare phenomenon.

This theory is just as unproven as all the others.

The Star of Bethlehem

Yes, even this feature of the biblical Nativity story has been explained away as an antimatter meteor!

One controversial scientist has disputed that the "star" could be explained by things like comets, planet alignments or supernova explosions. He suggested that, because it stayed in one place for a good length of time, it could have been an antimatter meteor gradually annihilating as a huge example of ball lightning.

Without taking the religious route and saying that God simply put the star there, it's as good a theory as any.