Alien Life - how likely is its existence throughout the Universe?

Alien life that has evolved to possess intelligence and be technologically advanced, if it's of similar chemical composition to us, first needs a planet to live on. In recent years, there have been more and more discoveries of planets orbiting stars other than our own. It turns out that it is more the norm than the exception for stars to possess a planetary system.

As technology improved, more and more were discovered, until, as of November 2013, 1,036 have been confirmed, with a further 2,000 or so as potential candidates. 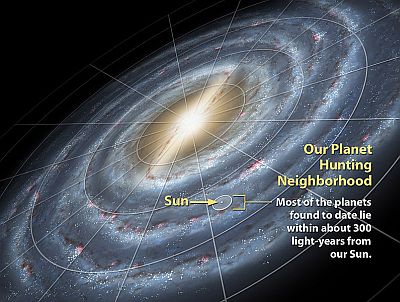 As shown here, the current main search area extends a mere 300 light years out - a small fraction of the Milky Way. Within this, there are 110 confirmed Earth-sized planets and 148 "super-Earth-sized" (defined as only a few times more massive than Earth). 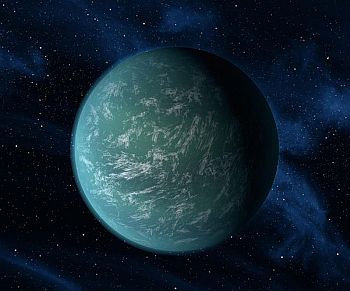 Here is an artist's depiction of the super-Earth-sized exoplanet, Kepler-22b. It orbits the G-type star, Kepler-22, which is similar to our Sun and found in the constellation Cygnus. As you can see, it does appear Earth-like and is around 600 light years away from Earth. It is estimated, however, that the nearest Earth-like exoplanet could be as near as 12 light years.

The American astronomer and astrophysicist Frank Drake first came up with his famous equation in 1961 and it seemed to attempt to work out how many technologically advanced alien life forms might exist within our Galaxy that we might detect or communicate with.

The trouble was, many of its parameters were too broad and had to be literally guessed at, causing some of his critics to ridicule it. Drake, as it happened, didn't intend it as a rigorous calculating tool, more a way of stimulating discussion between other scientists on the subject.

Anyway, the number was calculated by gradually narrowing down, according to certain criteria.

Firstly, we start off with the rate of star formation in our Galaxy. This is one value we can be reasonably certain of, as current NASA observations set it at seven per year, added to the billions already existing.

Next we have to consider how many of these stars have planets. Again, observations suggest that a star will generally have at least one planet orbiting it. In all probability, planets will outnumber stars.

Narrowing it down further, we have to include only those planets that have the potential to support life. Scientists have estimated that there could be as many as 40 billion such planets within the Milky Way.

When we consider the next parameter - how many of these planets actually go on to develop life - things become a little contentious. Taking Earth as an example, life seemed to appear on our planet quite easily as soon as conditions were favourable. It cannot be assumed from this, however, that the same scenario occurs elsewhere. Nevertheless, some scientists have stated that, for planets at least one billion years old, some form of life will have developed.

Out of these planets, the next parameter is how many of their life forms will go on to develop intelligence. Again, this is extremely controversial. Considering Earth once more, some scientists have pointed out that, despite the billions of species that Earth has harboured, only one has developed intelligence (us, if you weren't certain). Yet others remark that the history of life on Earth consists of life forms of ever increasing complexity, which would suggest its culmination in intelligent life is more probable than not.

Next is the number of these intelligent alien life forms that have developed a technology that is detectable from space. The human race is one such life form. The Carl Sagan novel "Contact" demonstates this idea quite neatly. The aliens that contact Earth have intercepted a TV transmission of the Berlin Olympics in 1936 and replied to it. Ever since then, our TV and radio broadcasts have been radiating off into space.

Finally, we consider how many of these alien life forms have survived long enough to manage to communicate across interstellar space. Various scientists have made estimations of the necessary time span - Michael Shermer reckons it at 420 years. Carl Sagan maintained that the number of these civilizations is strictly limited to those than can avoid self destruction.

The final figure arrived at by Drake, taking uncertainties into account, was anything between 1,000 and 100 million technologically advanced alien life forms.